The Snatch is one of the quintessential kettlebell movements; the combination of strength, power, stability, and cardiovascular fitness embodies kettlebell lifting perfectly. Whether you want to build power or strength endurance, the Snatch is a great exercise to add to your training. Another reason to love the kettlebell Snatch is that the movement is accessible to a larger population than the barbell Snatch; the mobility requirement is less stringent, with many of the same benefits.

Since the Snatch is a highly technical movement, take plenty of time to practice with a light kettlebell. The neuromuscular system needs time to coordinate the movement and build muscle memory. The shoulder also needs time to build stability in the overhead position. A great way to start is to practice the Half Snatch. This allows you to focus on the upswing of the movement before tackling the more challenging drop into the backswing. Once the upswing is mastered, you can work on the drop, making sure that you allow the bell handle to skip the center of your hand on the way down so there is no pulling on your palm, which can cause blisters and tears. 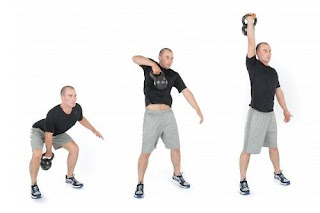 The Renegade Row is a challenging core exercise that involves both pushing and pulling upper body components. The movement is comprised of one kettlebell push up followed by a row on each side from the plank position. One of the main functions of your core is to prevent trunk rotation, which requires your core, glutes, and hips to work together. Keeping the hips in place while performing rows in the plank position is a great way to train anti-rotation, as well as upper body pulling. The push up provides the upper body pushing component, and requires the core to stay active.

The Renegade Row should be trained with focus on form, not speed. Moving quickly typically leads to hip rotation and less core engagement. Instead, move slowly and deliberately to ensure proper body position in each part of the sequence. Start with 3-5 repetitions and work up to 10 repetitions. When you can easily complete 10 repetitions at a particular kettlebell weight, you can move up to a heavier weight.

1.      Start in the plank position with a kettlebell underneath each shoulder. Begin with the feet spread apart wide, and move them closer if you want to make the movement harder.
2.      Perform a push up, keeping the elbows in close and the belly button pulled up toward the spine to engage the core.
3.      From the plank position, perform one row on each side. Try not to move the hips -- this is the anti-rotation component -- and think of pulling the elbow and hip toward each other while you row.
4.      Once you complete the rows, go into the next repetition.